Containerization explained: run your code on any infrastructure

The increasingly pressing needs in the IT sector for flexibility and the capability to deploy business applications on different infrastructures, on-premise and in the cloud, today find the most practical and effective answer in containerization. In fact, containerizing the software makes it possible to simplify the deployment phase, speeding up the release and the update of applications and software products.

This practice also makes it possible to migrate existing applications from data centers to multi-cloud IaaS services, where they can quickly scale into production environments as needed.

Therefore, containerization allows the enhancement of software investments, taking full advantage of existing resources, and those currently offered on the service market. In fact, it can be included among the recommended practices for adopting the DevOps development paradigm, which requires to automate activities as much as possible in order to improve and speed up the development and release pipeline of software products.

Execute your software in different environments

Therefore, software containerization allows deploying applications more quickly and securely, regardless of the environment in which the software will be run.

The practice of containerization operates in a similar way to virtual machines (VMs), but without the burden of the operating system and system interfaces. It is a "lighter" and simplified way to virtualize software execution, through containers that run directly on the kernel, with savings in terms of the amount of data, transfer times, and deployment on execution platforms. 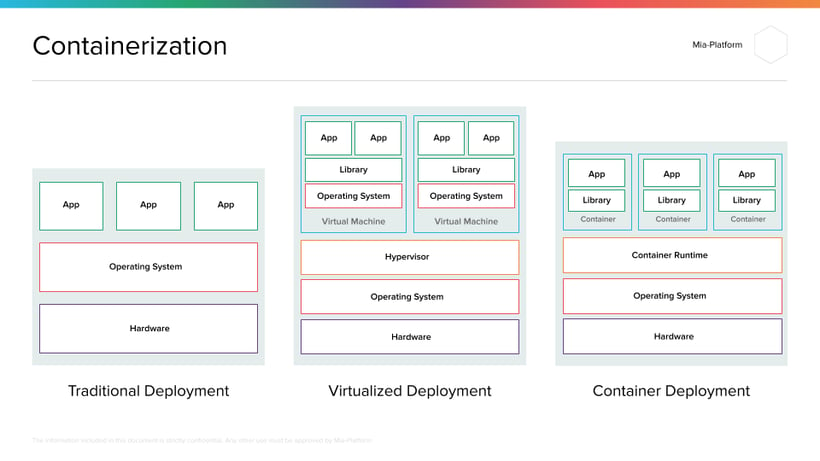 The use of software containers starts from Docker, an open-source program for containerization under Linux that has become the market standard in a few years. Docker has made the use of containers practical by encouraging companies to move in this direction. In addition, the broad support gained from leading server vendors and service providers offering IaaS services has further paved the way for the adoption of this technology.

Finally, to simplify the management of application environments based on containerization, open-source tools such as Kubernetes were born, which quickly became the primary choice for container orchestration. With Kubernetes multiple containers can run as a single instance, each recognizing the file system, CPU, RAM, I / O as dedicated resources to its execution. The level of abstraction introduced by Docker and Kubernetes helps the management of large enterprise application environments whose operation is entrusted to groups of software containers.

The advantages of containerization for the company

Among the most important advantages offered by containerization, we find the possibility of having applications that can run both on the company data center and on cloud services of different providers. This is followed by the ease and speed with which operations teams can deploy, in an increasingly automated way. Operators no longer have to worry about the specific software versions and configurations of each environment: they can better focus on application logic and dependencies.

Containerization is also associated with the portability of applications, an aspect that allows to quickly move software between test and production environments, between on-premise and cloud systems, and between clouds of different suppliers, according to every possible convenience.

Although with less strict levels of segregation than virtual machines, containers increase security, by isolating applications from each other and from the systems on which they run. Finally, the containerization of applications allows to easily scale the power and benefit from more automated and simplified management, also thanks to the use of orchestration tools such as Kubernetes.

Harnessing the value of containerization

Container technology responds to the modern needs of scalability, flexibility, and performance of application supports. In addition, it is particularly functional for digital transformation and the development of software projects capable of taking advantage of IT resources available as a service.

Migrating applications to the cloud allows the use of containers more effectively to make the deployment of existing applications more flexible and to improve scalability and user experience. In summary, containerization allows you to modernize application deployment, preserving past software investments, improving the level of automation, and access to cloud resources.