API Economy is taking off globally: banks, retail, utilities, transportation, and even public administrations develop their offer of products and services through APIs. But what exactly does the term API Economy mean? What is the Open API paradigm and why is it establishing itself so strongly? 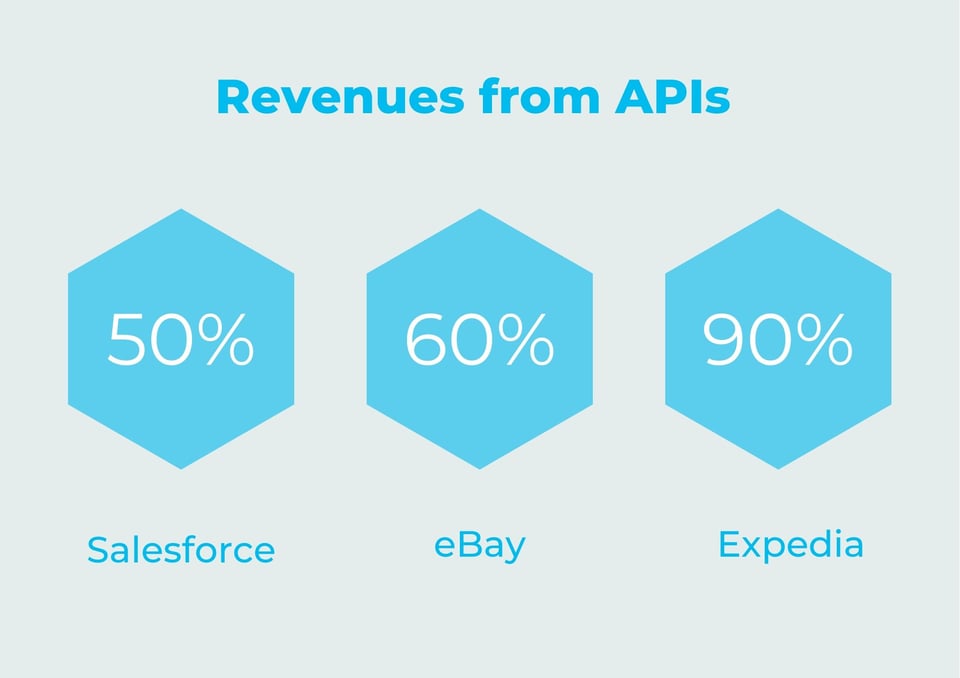 From the Web APIs to the Economy APIs

We can say we are in an “APIs era" because application programming interfaces have now become a vital part of all digital processes.

As a matter of fact, APIs are IT tools with a long history - dating back even before the Web - but they have established themselves in the last decade as key tools to respond to the two great forces that characterize the fourth industrial revolution: digital transformation and omnichannel.

The fundamental feature at the center of the fourth industrial revolution is precisely what the APIs respond to: interconnection. The ability to combine, mix, aggregate, and offer ever new data, products, services, and information - that were once totally separated from each other - radically changes our lifestyles and, logically, the market in which companies operate.

Think about it for a moment: back in the early 2000s, we only needed the phone to make calls (with some minor exceptions). Today on our phones we have an app for anything: for sharing photos, ordering a pizza, booking a taxi, following the news in real-time, checking in for a flight. All this mentioned is possible thanks to the Web API.

Becoming a “Platform Company” thanks to the APIs

Web APIs allow companies to make a big change. APIs open organizations' IT systems to the web, by disrupting traditional business models and by accessing to increasingly innovative services in different sectors – this is also possible thanks to the growing diffusion of the cloud and mobile channels.

Companies such as Amazon, AWS, eBay, Facebook, Twitter have been able to make their services prevalent thanks to the API. For example, think about the SDK kits for Android or iOS, their respective APIs, and how they have allowed Google and Apple to enormously expand their distribution channels, to become platforms and marketplaces that, thanks to developers, boomed the app market worldwide.

It is no coincidence that Kristin R. Moyer, Vice President and Distinguished Analyst of the research company Gartner, said: “The API economy is an enabler for turning a business or organization into a platform”.

The opportunity to become a Platform Company is increasingly evident today: thanks to the API, companies gain a new ability to connect to their customers, by expanding their channels, innovating their offer, and improving engagement.

The OpenAPI standard and its contribution to the API Economy

The more APIs spread, the more it is important to find common standards for their design, to encourage their reuse and sharing between applications, projects, and even different companies.

To standardize the use of APIs, the OpenAPI Initiative (OAI) was born in 2015, as an open-source project under the Linux Foundation, which promotes the OpenAPI Specification (OAS).

The OAS is an open-source framework for the definition and creation of RESTful APIs (Representational State Transfer) according to an open approach. The RESTful API is an architectural style for the design of networked applications and web services and uses HTTP requests for data creation, reading, updating, and deletion operations. Since they are independent of the type of technological platform, and they are based on standards such as the HTTP protocol, the RESTful APIs have ease of use advantages, performance, maintainability, scalability, management flexibility, which make them suitable for different technological and business needs. In addition, RESTful APIs contribute to the development of the API economy.

API as a Product and the OpenAPI paradigm

Thanks to their diffusion and standardization, we have seen APIs become a central element of companies’ offerings. This is why today we speak of "API as a Product" (AaaP), the API is the real business product. As a matter of fact, the API itself contains the heart of the value that the company provides to its users, while the digital channel simply becomes a vehicle - the space - in which the relationship between brands and consumers takes place. The same information can, therefore, be displayed on multiple channels, increase its value, and make an omnichannel strategy effective. 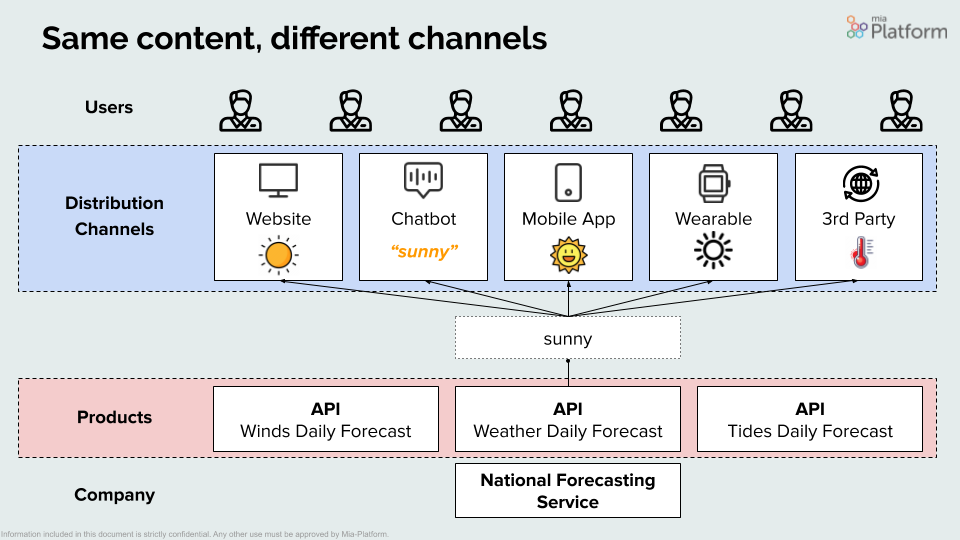 Therefore, organizing and managing “APIs as a product” are essential activities. Companies might start creating an APIs product catalog to start creating their business offers. Thus, API Platforms emerge, which are omnichannel access layers, that allow you to connect the organization's information systems to the outside world.

Through its API Platform, each company can develop its own API ecosystem. In addition, each company can differentiate the various access levels: from exclusively internal APIs, used for the connection between the company's applications, to protected APIs – reserved, for example, to some partners - up to the public API, around which the Open API model was born.

Developing some APIs - according to standard guidelines to make them publicly available - allow a company to achieve numerous business benefits. The benefits vary from partnerships expansion, to open innovation processes facilitation - as innovation and development activities in collaboration with third parties – and, clearly, up to data monetization through the offer of paid APIs. 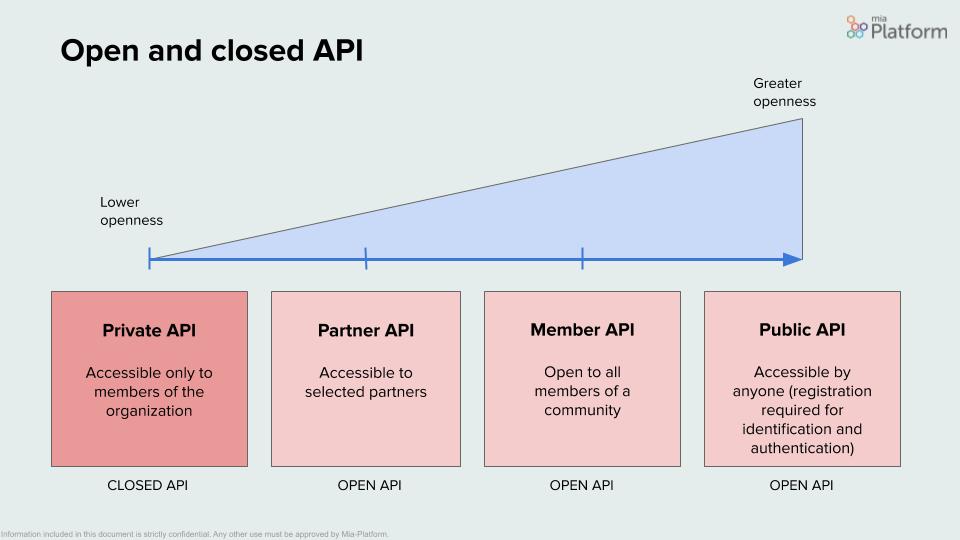 The importance of public API ecosystems for innovation and economic development has become so relevant that institutions have started working on it too. For example, the recent introduction of the European PSD2 regulation gave a fundamental push in this sense to the Open Banking - the application of the Open API model for the banking market. In this sector, Open Banking and APIs, in the last two years, have made possible the spread of instant payment tools, peer-to-peer loans, and the automation of credit scoring. In addition, the fintech ecosystem in Europe is today one of the most advanced and rapidly expanding, with an estimated value of over 150 billion euro in total.

Banking is today an excellent example of how an Open API strategy can help companies innovate and generate new business opportunities. The same phenomenon will increasingly affect more sectors of the economy, from transportation to retail. Companies with a more mature API strategy will be able to leverage this to obtain an important competitive advantage.